The school was opened by Mrs Florence M. Hunter on 23rd of July 1907. The unfortunately named Neglected Children’s Department supplied the premises, a 20ft x 14ft room, and the Department, the furniture and the teacher. Five weeks later came Frances Barkman who coped with an a.a. of 71. After a year, she left and it was probably the appointment of a JT which induced her to return within weeks. Mrs Rose C. Mowsey, her successor in 1911, remained for almost twelve years. Next came Richard J. Keddie (September 1922), Frank L. Vicks (1927-36 and 1940-43), T.B. Hunter (1937), Brian Quilligan (1965) and Principal Nicholas F. Stella (1966). In 1923-24, a five-room brick building costing £3,035 16s 7d was erected, two classrooms were added in 1954 and another in 1959. Until 1943, the policy for state wards was co-educational; with a change in this year to segregation, boys [over] fourteen were transferred to SS4609, a new school nearby. In 1970, the open section of SS3552 also moved, to a modern seven-classroom building in the NW corner of the main institutional grounds.(Blake, 1973, Vol. 3, p. 113)
​
Changes began with the implementation of the Children and Young Persons Act 1989. The major provisions of the Act were lowering the age of criminality to 10 years, and dividing the Children’s Court into a family division and a criminal division so that non-offenders to be separated from offenders.

The catalysts for the CYP Act were the Equity and Social Justice for Children, Families and Communities report which was also known as the Carney report (1984) and the report of the Senate Standing Committee on Social Welfare (1985). They were followed in 1986 by CSV papers on the redevelopment of residential services for children and secondly the redevelopment of services for convicted young people.

The first school council was not established until 1978. This was also the year when restructuring of the Social Welfare Department meant fewer placements at the Centre but they were there for longer periods. There was a 14% drop in placements that year to 400.
In 1979, the staffing at the school began 40% less than the schedule. Two years later, the Centre was being restructured.
Following a 1985 review into the Centre which recommended it close, this occurred in 1990 along with the closure of the school.
(PROV, VPRS 8796/P0001/69)
Principals include:
Baltara Reception Centre closed. Winlaton, which previously housed only females, was renamed the Nunawading Youth Residential Centre. In addition, to housing the female offenders, it established the first criminal facility for boys less than 15 years of age.
Non-offenders who needed care were relocated to short and medium-term units in the community. The Male Secure Welfare Service unit was established on site in the former Warrawong for non-offenders, 10-17 years of age, who were at immediate and significant risk of harm. At the same time, the Female Secure Welfare unit at Windsor was established by Baltara Reception Centre staff. Baltara teachers set up teaching programs for young people in the Secure Welfare units.

With spare capacity, Baltara School, with the support of the Education Region, established the Baltara Integration Unit (BIU) at Parkville that later moved to Northcote in 1994 sharing site facilities with Croxton Special School. The BIU provided an intervention program for students aged 10-15 years who needed support to maintain their engagement in education in local mainstream schools. The Northcote campus was amended in 2004 to take Years 5 and 6.

The BIU moved base to Thomastown in 2009 sharing site facilities with Thomastown East Primary. When the Secure Welfare Unit (Male) moved to Ascot Vale, the Baltara Reception Centre site was official closed in July 1992 and, in 1993, Nunawading closed and the facility relocated to the current site.

Education for boys and girls under 15 years of age attending the newly established Parkville Youth Residential Centre came under the mantle of Baltara School giving it a fourth campus. Except for a hiatus of about twelve months when there were no residents on the site, Baltara has maintained a presence on this location since it was originally established.

In 1993, the school operated on three campuses – Ascot Vale for boys, Windsor for girls and Parkville for youths on remand.
New classroom facilities were constructed in 1999 at Parkville and “down the hill”, the old part, demolished.

In May 1994, the girls moved from the Windsor site to the new Maribyrnong Secure Welfare Unit facility. The boys moved to Windsor in July 2001 while refurbishment occurred at Ascot Vale. When that had been completed, the boys returned in 2003 and there was a Ministerial opening. The Windsor centre was decommissioned.

Another campus was added to Baltara School in 2008 with the addition of the Hurstbridge Farm.
In 2011, Baltara School added a further campus, the Social Integration Unit in Preston, creating a sixth campus and renaming it the Preston Integration Unit (PIU) catering for students experiencing challenging behaviours in mainstream schools in the Northern Metropolitan Region in Years 1 to 4. 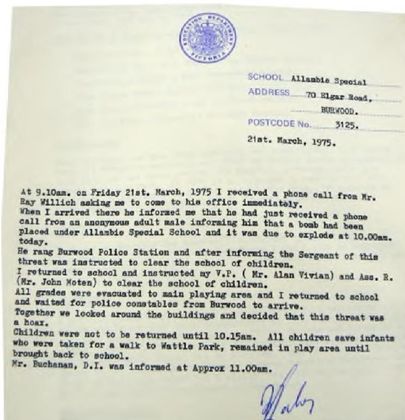